“I did not know then that this is what life is – just when you master the geometry of one world, it slips away, and suddenly again, you’re swarmed by strange shapes and impossible angles.” – Ta-Nehisi Coates

I remember my friend telling me about racism when I arrived in America in August last year and the whole time, I kept dissecting his rage, wondering what good anger will do. It was only a matter of time before my ignorance would contort into a guard of numbness that separated me from everything, from acknowledging a system steeped bone-deep in racial inequality. I never thought coming to America as a black girl would mean more than just getting my MFA degree, until now. The awareness of my new identity did not take long to unfold in a world where I’m suddenly the only person who looks like me in a class or on the streets. This quarantine, I’ve sat by my window to count the number of black folks who walk by and there’s been none so far. Clearly, there’s some isolation within this isolation and I have had to make peace with that. Some peace come easier than others; like missing my family or moving on from a relationship.

The murder of George Floyd has me wrecked. I sat in my tiny room and wept, clicking video widgets on YouTube that promised to give answers, some kind of relief, until I decided to go off social media, overwhelmed and triggered by everything I saw. I read about violence and I’m familiar with its wretched existence.  When I worked as a reporter, I filmed documentaries with survivors of abuse. I imagined I had a shield, some kind of strength to prepare me to witness the knee of a cop pressed into a black man’s neck, strangling him. I was wrong. Nothing ever prepares one for such a cruel and inhumane act as that. While I grieve, I talk to friends, cry to them, and ask: What could one possibly want from a man in a posture of surrender, a man showing no sign of resistance? What could push a human being to act in such a way, as though without conscience, as though having no heart of their own?

None of my friends would go with me to the protest for reasons well known. In a text, one said: “Don’t go. This is Orange County. In more safe spaces, people have been run over, tear-gassed and shot. You are an international student.” Before I stepped out of the house, my white housemate asked me if I’ve got health insurance. Another text from a friend read: What would you accomplish by going? To which I replied, what would I accomplish by not going? There were a few more texts, all admonishing and urging that I keep safe and for some reason, I didn’t budge. How strange that a system compels us to anchor our lives on calculated risks, to slowly tend and cultivate a cautiousness that has us questioning everything, even ourselves. But what do I know? I had no insurance against the aftermath of this act, and had it gotten out of hands, I’d have had no kind of protection. I was either very foolish or very brave, or perhaps both. On Saturday, I showed up in Old Towne to find fewer black people than I expected and more white people displaying protest signs, shouting at the top of their lungs:

The sun was scorching down on us and my throat was parched and burning. A stranger offered me a bottle of water to drink. My arms ached from carrying a poorly made sign from a Trader Joe’s paper bag which read Don’t Call Us Dead, from Danez Smith’s work. I wasn’t sure what to expect walking a distance to a protest alone with such a sign, so I held it like a paper bag until I arrived at the scene and spread it open. It may have been cowardly, but I showed up. Later, someone will give me a bigger sign, Black Lives Matter and I would thrust it out, chanting the words with everything in me. I was in a daze, the loud honk of cars blaring in my ears and quick movements spinning the scene about me, making me dizzy. I do not do well in a crowd, much less alone. And there I was, in a foreign country, refusing to be silent. I couldn’t read all the signs but I wanted to, to take in the moment, to mark every face that was fighting for something, to hold them to their word. To hold them accountable. No Room for Racism. Silence is Not Golden. White People Do Better. I thought to myself, do they mean these words? Will I ever see through the disguise? Do they really want to do better and do they know how? Are they ready to reckon and confront the legacy of violence and subjugation, to come to a point of awakening where systemic racism is self-evident, and they recognize the need to change within?

In the words of Audre Lorde, “to reach down into the deep place of knowledge inside themselves and touch that terror and loathing of any indifference that lives here. See whose face it wears.”

There was a moment during the protest where an electric chorus followed my words. I didn’t realize I was leading until I saw people waiting for my cue to join in. I was unhooked and as if possessed; the tension of fear having broken through me. I was untouchable, even powerful for a moment. “I can’t breathe! I can’t breathe!” We took up Floyd’s cry and made it ours. I don’t think I’ve felt my voice charged with such intense emotions. I was instantly seized up by an urgency, my whole body moving with rage and a plead for help, my voice directed at everyone around me- the cops on the side of the streets, the white people alongside me protesting too. I’ve done many a brave thing but this, this open cry for liberation and justice? The bravest thing I’ve ever had to do.

After nearly three hours of marching around the Plaza Park in Old Towne Orange, my vocal cords strained from screaming, Marie, a new friend I made will offer to drive me home, she wouldn’t let me walk home alone. She said she’s worried about me. Said her boyfriend is black and she came to protest for him because “they would kill him, but they can’t kill me.” I felt a lump caught in my throat. I couldn’t find a response to that but I thought to myself, Oh she knows. She recognizes the truth of the present and has chosen to act on it. How much longer will it take for others to arrive at this reckoning? To understand their own history and its brutal wrought upon the world; and to be released from its hold over their lives? How many more deaths and protests before people begin to really look within themselves and confront destructive ideals about their assumed superiority, their privilege, the very foundation of their existence? To make the personal political and dissent from any indifference to institutionalized dehumanization.

I arrived home and quickly settled to write what I had just witnessed, not wanting to forget anything. I understand there’s so much I don’t know about racism in America but if I’m certain about one thing- it is that there is no peace to be made with injustice. As I sit here recounting this experience in my small and private moment, there is a deep lingering of how do I go from here? How do I proceed to live a life not scarred by palpable rage or caught in perpetual distraction from probing a social system predicated on the foundation of racial hierarchy? I don’t have a clue as to this imposition on my mind; but this inconvenience I can bear when the lives of black people are on the line. This is my truth- I am growing into a consciousness that may shock me with its reality, but I will see it through, even fearfully. I may not have the power to prevent injustice, but I sure am not incapable of doing something meaningful about it.

35 thoughts on “My First Protest in America: A Brief Witnessing & Haunting Inquiry”

Everyone calls me Try 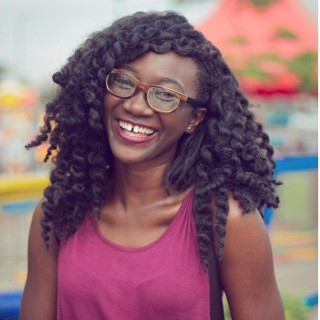 You'll find me anywhere there're lots of books and too much love to be contained.